Kitchen Antics & Appliances was established in 2005, by artists Barbara (now Rebekah) Dean, Hilary Kneale and Ann Rapstoff. Their collaborative practice was interdisciplinary with an emphasis on live and interactive strategies. In addition, it involved exploring dialogue, communication and intervention with transient communities.

Projects included a residency at The Museum of Domestic Architecture at The Cat Hill Campus of Middlesex University (MODA), collaborative and individual work at The Art Shop Abergavenny Wales, during the towns food festival and a further period of work at Depot Untapped an arts festival at The Arts Depot in Finchley, London

Collaborative work is outlined below and residency work and individual work can be found on further links on the website.

collaborated with Barbara (Rebekah) Dean and Hilary Kneale,‘Kitchen antics and appliances’, was a collaboration with Barbara (Rebekah) Dean and Hilary Kneale, examining notions of home particularly from the ‘rear’ or under belly’ of the domestic environment. Subtleties of memory provoked by domestic objects will encompass performance, book works and work on the web.

Annie  to develop an arts council funded residency at The Museum of Domestic Architecture (MODA) between April and November 2006 (submiited funding application to The Arts Council. The residency will run in parallel with ‘What’s for Dinner: Half a Century of Eating Habits, a MODA initiative funded by The Heritage Lottery Fund.

As part of the research and work, community elders groups will be invited to respond to the collection, finding ways to access reminiscence and memory through the objects in the setting of a traditional ‘tea party’. Groups will have access to the collection and interaction with the artists as they work.

Members of the group will be invited to bring a personal domestic object that holds some resonance, memory or story, which they will then be invited to share with the group. The content of these will vary, as will the depth and approach, all will be valuable. It is anticipated that the narratives concerning objects, memories and associations, will enrich the museums collection. The domestic environment is under constant reinvention, it is subject to both cultural and consumer influences and is a personal environment that is also an expression of personal identity.

SPREAD 2, AT THE ART SHOP GALLERY

At the second outing of ‘Spread’, Kitchen Antics and Appliances presented a live unfolding installation in The Art Shop Gallery as part of The Abergavenny Food Festival. The work of Kitchen Antics and Appliances continued its exploration of the possibilities of home and group identity. What makes a group gel, how do groups work, how does a piece of work exist in time and create a moment of communication?

The advent of the virtual world and video games have killed off such games as scrabble, monopoly and Cluedo. Activities such as blind mans buff, often played by children, perform a fuction in developing a communal sense of momentary identity. In the past singing and story telling were central in wiling away the hours. In the various unfolding performances, Kitchen Antics explored  notions of belonging and exclusion, unity and separation, identity and difference through the games format, participatory discussion and story telling.  .

Their response to site and environment continued with the ‘table’ presented as a central focus for the work, a stage. a frame and ‘welcome’ for the audience. The ‘table’ alludes to memory, questions concerning traditions such as manners and conformity. However this scene is made strange, by formal settings of discordant china, strangely matching yet disparate, suggesting a discontinuation of lineage, continuity and history.

The performances unravel over the three days, revolving around a series of interventions and engagements with the invited audiences. The artists work instigate plots and strategies - cautionary tales and parlour games to further explore the notions of belonging and exclusion. These are mobilised into group activities in which the audience, no longer restricted by the protocols and politeness of social engagement, become central performers in the events.

Various individual and collaborative events took place during the weekend of the food festival.

a menu of conversations

a continuum of whispers

a chorus for hosts and audience of sayings concerning food

three blind mice and knitting for the guillotine 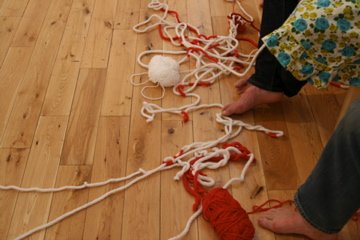 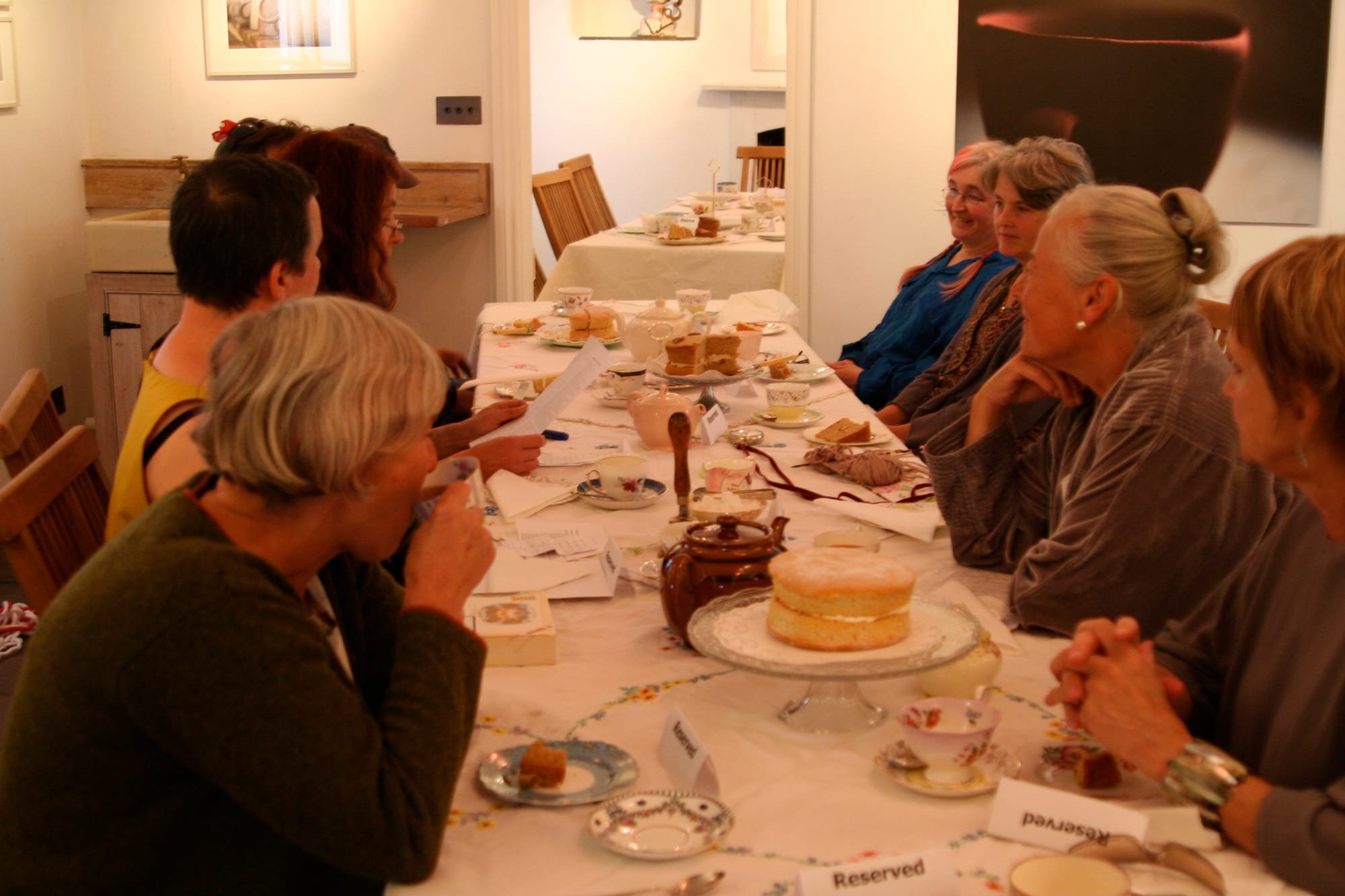 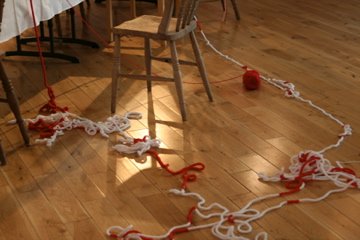 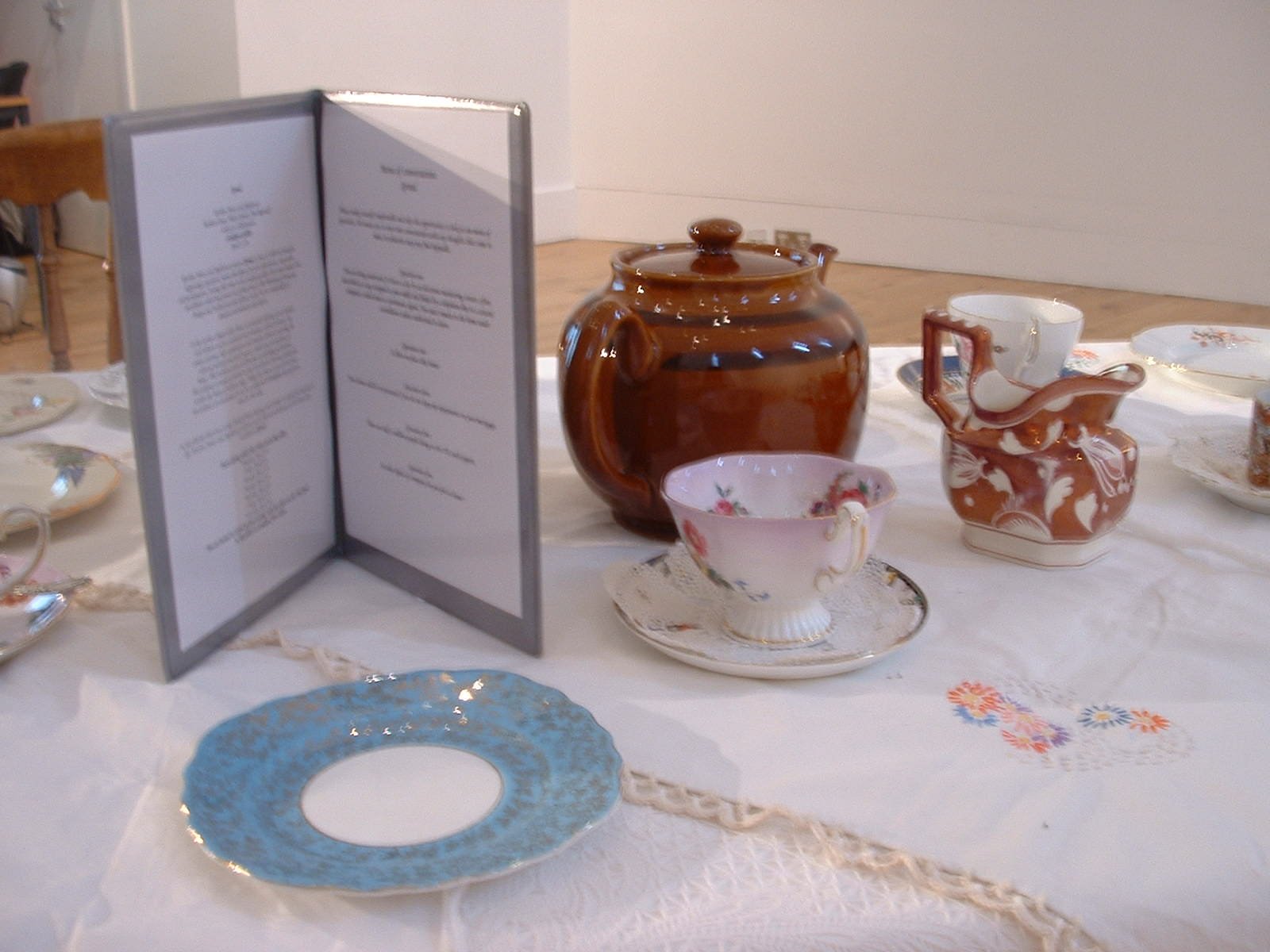